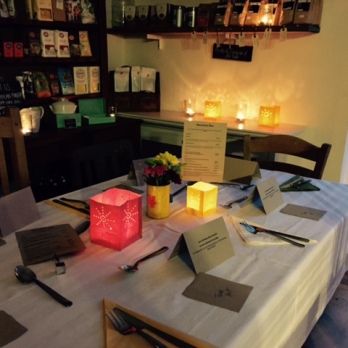 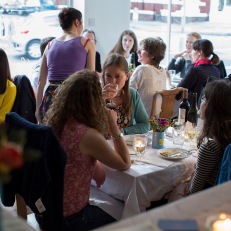 The last 2014 Lia’s Kitchen pop-up dinner took place on the last full moon of the year . On Sunday afternoon I ‘sat’ tired amongst boxes and paperwork reflecting on the two pop up dinners we completed this weekend. What a success!

Accounted for are a broken box (it happens), a broken gazebo (don’t ask), at least 30 to-S and fro-S between the shed , the living room and the car, hours of cooking , sorting , cleaning, thinking. And also one proud me and endless moments of contentment.

I begun and ended this year’s pop-up dinners at Penylan Pantry a deli/café that has livened up and brightened our area.  I have thrown five pop up dinners since May 2014 all exploring foods, cultures and recipe combinations that I love. It’s been quite the journey, fulfilling and always full of surprises.

The next immediate thing on the cards for me is slightly different in that it will involve educational waste awareness workshops to help people reduce their food waste. I will be working with two social venturers I respect a lot. I am very excited and proud I will be using my free time towards such a venture.

As for the future…it holds surprises that I cannot predict but I am sure there will be congregations as beautiful and warm as those of the last two days. So watch this space ! Get in touch! Don’t be a stranger!

Thanks to all who have joined our table and made these pop up dinners so wonderful. It’s the people who appreciate what’s offered to them and enjoy each other that create this wonderful atmosphere that seeps into our life and fuels Lia’s Kitchen.

Thank you old and new friends who help make Lia’s Kitchen happen through your hard work -you know who you are.

Happy birthday to the Penylan Pantry who is one today. Mel and Jo well done you are stars and thanks for hosting Lia’s Kitchen events.

thank you my darling! I can’t wait to have you at one of the dinners

Some of my favourite clicks